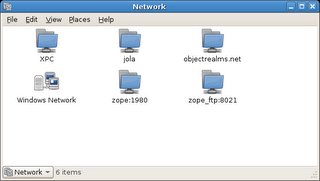 So I thought how nice would it be for Zope to announce itself using Zero Configuration technology on the network. On Linux we have Avahi and DBUS which make it easy to do such publications. Happily they both have simple Python bindings as well. With a small patch I was able to get my Zope servers to announce themselves on startup for HTTP, FTP and WebDav. They will automatically show up in tools like Nautilus (on GNOME) or Finder (on Mac OS X).

This has got to be nice in situations like Sprints where bunches of developers are passing links to DHCP generated address around adhoc networks. Heck, its nice just when I can't remember which port I left something on.
Posted by Benjamin Saller at 12:47 AM

Very spiffy, I've thought about this before but never got so far as to actually open an editor.

I have wanted this functionality for sometime. It was very nice when I was playing with TurboGears to see that they have the default developer mode setup advertise the TurboGears webserver via Bounjour which the Safari web browser automatically detects in its bookmarks.

Very nice work there! I can't wait to see what else you have up your sleeve.